And because they did cast them all out, that there were none righteous among them, I did send down fire and destroy them, that their wickedness and abominations might be hid from before my face, that the blood of the prophets and the saints whom I sent among them might not cry unto me from the ground against them.
—3 Nephi 4:6 RE

As I covered in my previous post, June 27, 2019 marked 175 years since the martyrdom of Joseph and Hyrum Smith. In keeping with its new policy of not commemorating significant events in church history, the LDS church did nothing to commemorate the death of its founding prophet.

June 27th passed without any official commemoration by the largest of the branches claiming Joseph Smith as their founder.

The next day, June 28th, the Lord gave his own commemoration, though it was more of a demonstration, really. What did the Lord do, you ask?

He blew Moroni's face off. Again.

According to a report from the Nauvoo Mercantile: 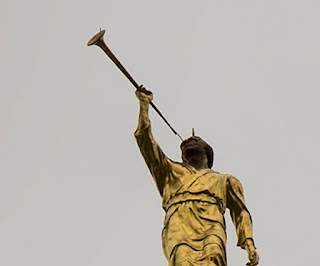 NAUVOO: Just shortly after 2pm, the Nauvoo Temple was struck by lightning. The statue Moroni atop the Temple tower took a direct hit from a lightning strike while a severe thunderstorm passed through the area. The shock of the deep boom startled those attending the Temple as well as most citizens in the entire city.

"I was actually looking up at the tower exactly when the strike happened" said Alex Claiborne, a visitor to Nauvoo who was just across the street as it happened - "there was smoke coming off the Moroni statue."

Today’s storm moved quickly and darkened the skies over Nauvoo as it  crossed several cities in the area.

There is no report yet as to the extent of the damage.

The timing cannot be coincidence. In fact, it's mind-blowing. (Sorry again, Moroni.)

When the LDS temple at Bountiful, Utah took such a hit in 2016, the damage went all the way to the footings of the tower, and required over a year and a half, and millions of tithing dollars to repair. Though I don't expect such extensive damage in this case, it nevertheless remains to be seen just how emphatic was the Lord's commemoration of the deaths of the prophets.

Meanwhile there IS in fact an emphatic commemoration planned soon at LDS, Inc., for a significant anniversary. It was announced on June 26, and updated June 27. The celebration is for Russell M. Nelson's birthday. This star-studded gala event will feature a huge lineup of performing artist and stars, and will be held in the 21,000-seat Conference Center. In addition to the live celebration at the Conference Center, the program will be rebroadcast in seven languages, including English, Spanish, Portuguese, French, German, Mandarin and ASL. So...it's not like the LDS church doesn't know how to celebrate a life.

An expert in sacred calendars let me know some important information about the timing of this event. The lightning strike occurred on the following dates and calendars: 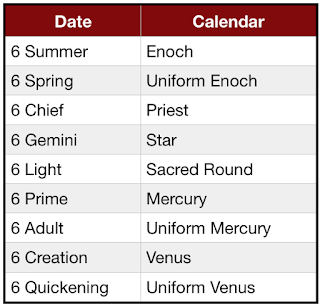 I asked this expert how often such an alignment might occur on 9 sacred calendars, all of which operate according to different days, weeks, months and years and cycles. He calculated such an alignment will occur approximately once in 10,000 years. In other words, this is an absolutely unique day in all history.

The timing, date and location of the strike were absolutely surgical. This was NOT a random act of nature.

Cursed are all those that shall lift up the heel against my anointed, says the Lord, and cry, They have sinned! — when they have not sinned before me, says the Lord, but have done that which was meet in my eyes and which I commanded them. But those who cry transgression do it because they are the servants of sin, and are the children of disobedience themselves, and those who swear false against my servants, that they might bring them unto bondage and death, woe unto them because they have offended my little ones. They shall be severed from the ordinances of my house, their basket shall not be full, their houses and their barns shall famish, and they themselves shall be despised by those that flattered them.
—T&C 138:13

Posted by Adrian Larsen at 5:20 PM