Why did God Kill Moroni?

As I’ve written about previously, Louis Naegle was excommunicated 10 days ago for his testimony of the Savior and his second witness of the book, Preserving the Restoration.

Today, at Louis’s former ward in Bountiful, sacrament meeting started at as usual 11:00 am. A stake high councilor—one of those involved in Louis’s excommunication—spoke at sacrament meeting. In his talk, he bore down in fervent testimony against apostates, declaring that there were those close to home who were attempting to tear down the Lord’s church and undermine the Lord’s prophets. This message is not surprising, given the recent excommunication of a ward member and the perceived danger that other ward members might follow a similar path. There was little doubt who the subject of the talk was.

The day had started out sunny and cool with morning temperatures in the 50’s. By 11:00 when church started, there were clouds, but no rain. By the time church let out at 2:00, a thunderstorm had developed, and at approximately 2:12 pm, just as church was letting out and people were running for their cars to drive home, a lightning blast struck 1.3 miles away from the church building, targeting the Moroni statue on the pinnacle of the Bountiful Temple. 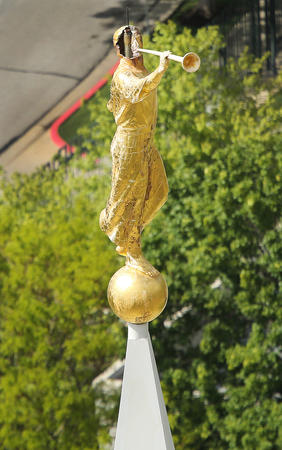 As you can see, half of Moroni’s head was blown completely off, as was a significant portion of his back, and his left hand.

The weather then rapidly cleared, as you can see from the photos taken later the same day, with the destroyed Moroni statue under beautiful, blue skies with a few fluffy clouds. 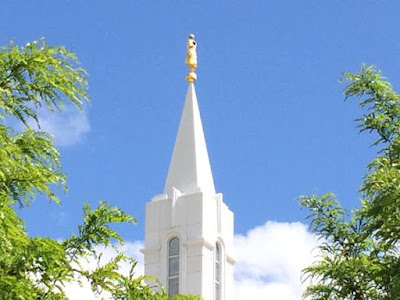 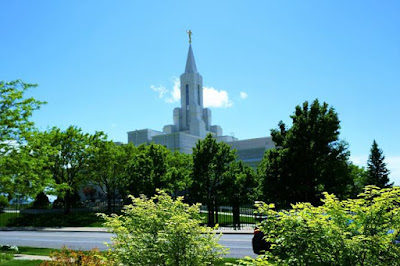 Ask yourself why the Lord would blow up the golden statue at the pinnacle of his own house. I hope it gives us all something to think about.

Some LDS faithful will argue this was a random act of nature, and is meaningless. After all, it’s only an act of God when it’s in your favor, right?

But given God’s history of using storms to accomplish His purposes, it’s worth considering the timing, location, suddenness, destructive force, and target of this storm. This was precise.

No, this was surgical.

Look at the weather radar map below. Not much happened until 1:45 PM when a powerful squall came out of nowhere, brained poor Moroni, then rapidly cleared up.

When other temples have been hit by lightning in the past, I don’t recall ever seeing Moroni blown to pieces. So maybe God is mad at Moroni?

As I wrote in another blog post, God testified of the book, Preserving the Restoration, by placing the blood moon Sign of the Dove in the eastern sky. That’s a pretty bold witness in favor of the book. Louis Naegle stood as a second witness of that very book, publishing his testimony to the world in the book’s preface. But, like so many others, his witness was rejected and he was cast out.


Even if you chalk this up to a random act of nature, you are in effect saying, God isn’t in control, or doesn’t even care enough about his own temple to protect it. Either way, it’s a tough proposition to defend if you support the LDS church.

No, God did this. And He did it for a reason.

Suppose, just for a minute, God really IS working in these days, to preserve the restoration and prepare for Zion, just as the revelations say He will. Suppose He actually HAS sent authorized messengers, but they keep getting rejected and thrown out. He has been incredibly patient, but at some point would you expect His warnings to start matching the words of scripture? When is enough, enough? What would you expect God to do to get our attention? Is it better to listen and consider now, before the fulness of His wrath is manifest?

The stake center where Louis Naegle’s excommunication took place is the closest LDS church building to the Bountiful Temple. It’s less than half a mile. I don’t know how the Lord could have been more precise and emphatic in this witness.

That stake high councilor may have spoken emphatically, but his thunderings are no match for God’s lightning.

If you haven’t yet read Preserving the Restoration, I highly suggest you do. Those gold Moroni statues aren’t cheap, and God went to some expense to make his point. I recommend you read Louis Naegle’s testimony and see what the storm is about. 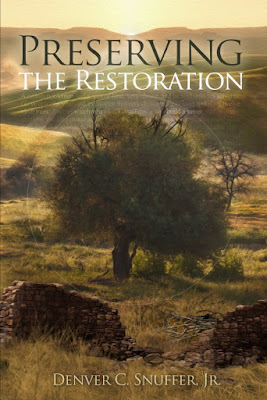 Confounded be all they that serve graven images, that boast themselves of idols: worship him, all ye gods.
—Psalms 97:4-7


Update June 1, 2016: The angel statue was replaced with a new one. Here's my favorite comment from the newspaper article about the new statue:

"I have to think the Angel Moroni is pleased having his image used to help protect the Temples of God and their faithful patrons from lightning strikes."

So wait...does God control the lightning strikes? Does Moroni's image therefore protect the temples from God's careless use of lightning? The mental gymnastics you have to go through...I just can't even.

Update August 26, 2016: The following paragraph is quoted from the dedicatory prayer for the Bountiful Temple:

We dedicate the ground on which the temple stands, sensing it was reserved for this purpose. We dedicate the beautiful structure, from the unseen footings to the majestic figure of Moroni crowning its highest point. We dedicate the baptistry, all of the facilities for administering the sacred ordinances, the endowment rooms, the sealing rooms with their sacred altars, and the lovely celestial room, together with all ancillary facilities and the beautiful grounds with their lawns, flowers, trees, and shrubs. Protect all from any devastating influence, destruction, or defacement.

Update June 13, 2017: It appears the damage was far more extensive than just the statue. The entire spire has been removed all the way down to the structural steel framing. There currently is no spire on the building, and it is being completely rebuilt.

Update July 22, 2017: Still heavily under construction (over 90 days now). Obviously, quite a bit more work left to do. Quite a bit of damage for a single lightning bolt. Imagine the destruction when God is really provoked. Here are some photos from today: 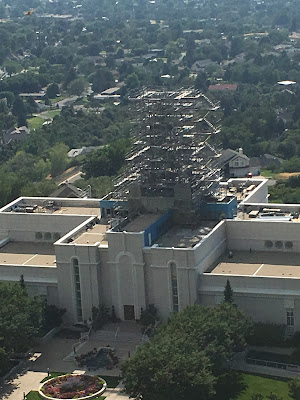 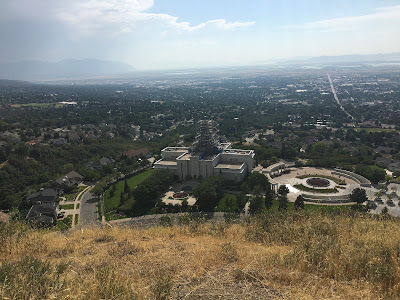 Update December, 2017: Reports suggest that after a year and a half, work on the spire is nearly complete. I've been told by those who claim to know that work took place clear down to the footings of the building, which is interesting, given the language of the dedicatory prayer.
Posted by Adrian Larsen at 11:12 PM