It's time for a quick report of the oddities and updates that aren't big enough to be their own posts, but nevertheless ought to be noted. Sorry about all the charts and graphs. I'll attempt to balance them with scintillating commentary, and I'll bring it all together at the end.

It may yet take awhile to die out at the local level, but as far as headquarters is concerned, the hastening is no longer worth talking about. Though we were assured repeatedly that the Lord was Hastening His work, He evidently now is not. 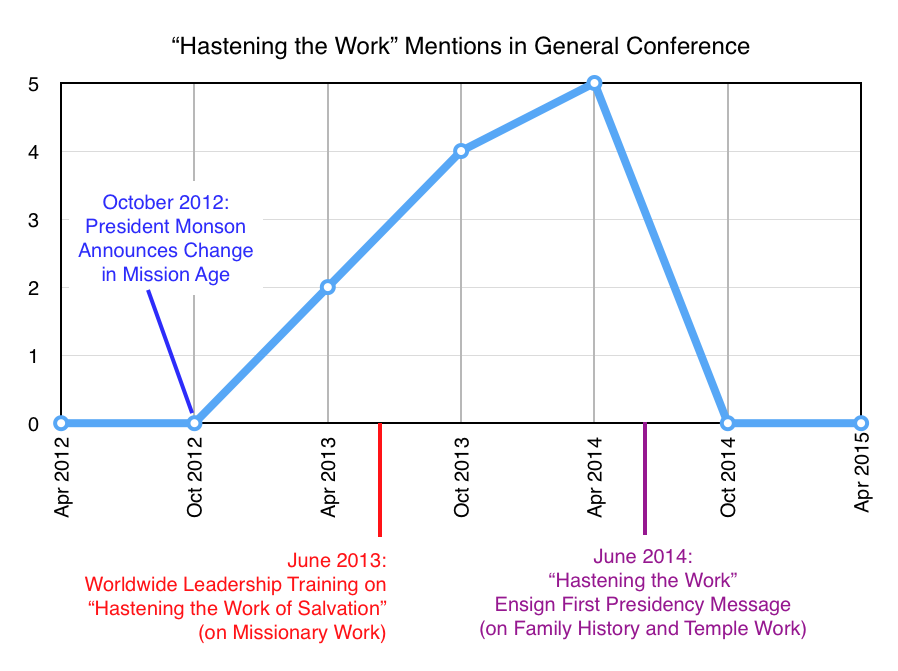 It's a matter of no importance, but the curious may note, the blog post that got me called in to my Stake President's office for eventual excommunication was the one that pointed out the myth of the hastening.

I wonder how much longer the "Hastening the Work of Salvation" website will remain up? Keep in mind this was the worldwide leadership training site for 2013. Every stake was required to hold stake-wide meetings on Hastening the Work.

The "hastening" death may have to do with the following information. It appears the only thing hastened was the age at which missionaries could serve. (I've highlighted the "hastening" period; click for larger graphs):

As you can see above, missionary levels were stable until the "Raising the Bar" policy change of 2002, which cut the missionary force by nearly 20% in 2 years, and more thereafter. (Does that bar look raised to you?) The age-change policy of 2012 temporarily reversed this trend, returning missionary levels to their pre-2002 average. When considered as a percentage of church membership, the missionary force is currently staffed at the same levels as the late 1980s and 1990s, though this level is forecasted to drop as the surge missionaries return home.

Church growth is nowhere near what it was in the 80's and 90's, and has actually suffered a slight drop during the "hastening:"

And, as has been reported in a major news outlet, the number of converts per missionary is also down considerably, due to the rise in missionary numbers with no appreciable rise in converts:

In other words, it's a youth program. A mission is an extension of mutual.

Now, I certainly agree going on a mission can strengthen one's testimony and provide valuable experience in preparation for future church service. Heck, when I was a missionary, there were plenty who were even sent on a mission in hopes it would reform them. And in some cases, it did. Nothing unusual there.

What's unusual is to attempt to explain the lack of converts by emphasizing that missions are mostly just about converting the missionaries. The headline in the piece calls this "a good reason why the church has more missionaries, but not more baptisms."

I guess I'm confused. This is comparing apples and oranges. Yes, missionary service can convert missionaries—always has—but this doesn't explain the lack of baptisms.

This graphic sums it up. Take a look: 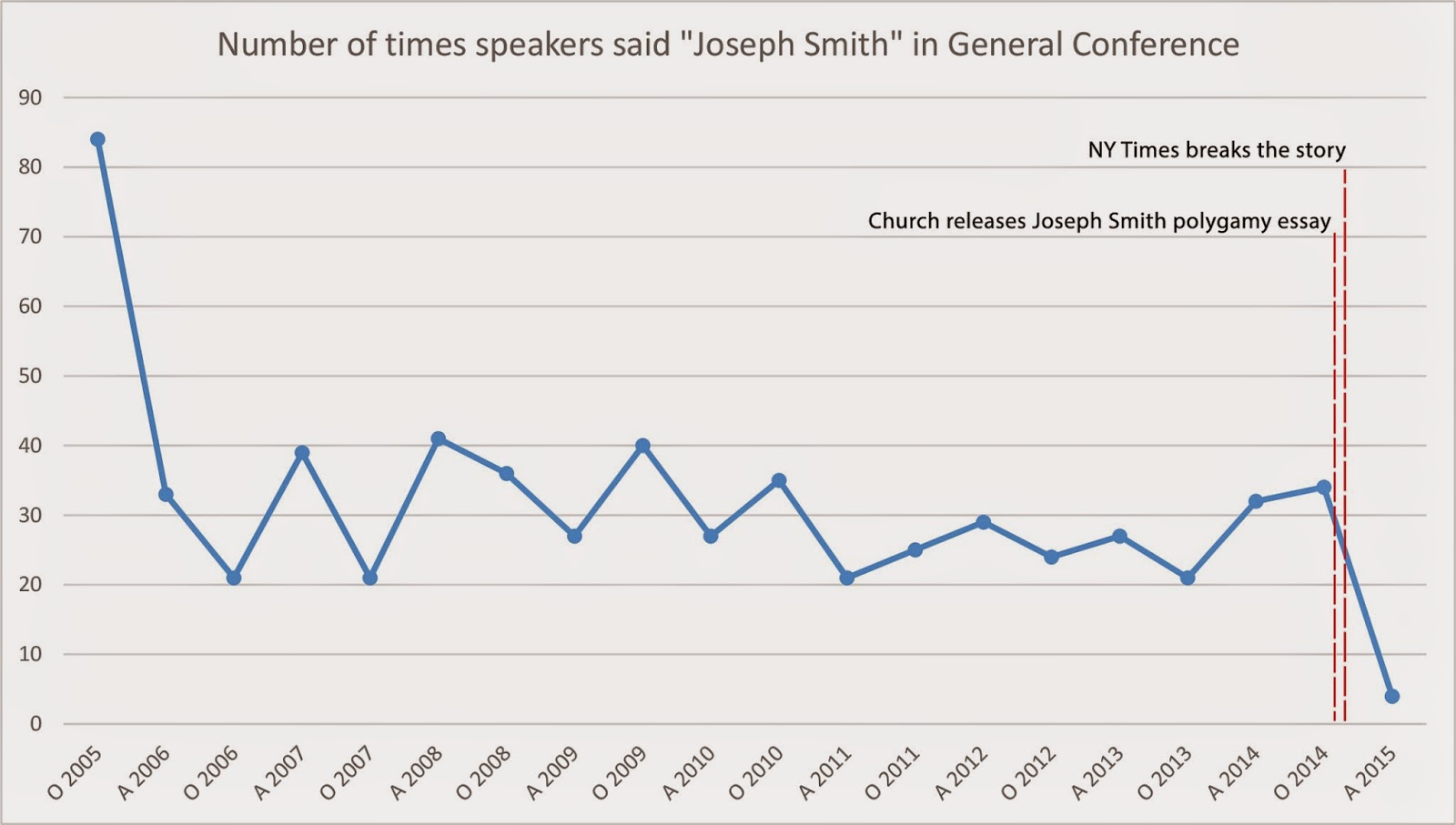 Throw under the bus (verb):
(idiomatic, transitive, of a person or group) To betray or blame (something or someone), as a scapegoat or otherwise for personal gain. To distance oneself from someone with whom there was previously a close association. To discard or disown. 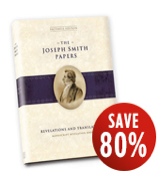 It has now apparently become nigh-on taboo to even mention the Prophet's name in General Conference. Presumably, this is a result of the bad PR surrounding the charges against Joseph Smith of improper sexual relations.

What surprises me the most is that the LDS Church made almost no attempt to defend its founder, but rather did serious damage to his legacy and memory with their polygamy essay.

Ironically, the best, most powerful, logical, and cogent defense I've read of Joseph Smith was written by a man who has been excommunicated for writing about church history and defending Joseph Smith.

Read it here. It's worth reading.

Meanwhile, the church is distancing itself from "the man who communed with Jehovah," about whom the Lord said the following (with references to Joseph Smith in bold):


Behold, there shall be a record kept among you; and in it thou shalt be called a seer, a translator, a prophet, an apostle of Jesus Christ, an elder of the church through the will of God the Father, and the grace of your Lord Jesus Christ, being inspired of the Holy Ghost to lay the foundation thereof, and to build it up unto the most holy faith. Wherefore, meaning the church, thou shalt give heed unto all his words and commandments which he shall give unto you as he receiveth them, walking in all holiness before me; For his word ye shall receive, as if from mine own mouth, in all patience and faith. (D&C 21:1-2, 4-5)

But, behold, verily, verily, I say unto thee, no one shall be appointed to receive commandments and revelations in this church excepting my servant Joseph Smith, Jun., for he receiveth them even as Moses. And thou shalt be obedient unto the things which I shall give unto him...(D&C 28:2-3)

Verily I say unto you, the keys of this kingdom shall never be taken from you, while thou art in the world, neither in the world to come; Nevertheless, through you shall the oracles be given to another, yea, even unto the church. And all they who receive the oracles of God, let them beware how they hold them lest they are accounted as a light thing, and are brought under condemnation thereby, and stumble and fall when the storms descend, and the winds blow, and the rains descend, and beat upon their house. (D&C 90:3-5)

We ought to be exceedingly careful about accusing Joseph of dishonesty, crime, sin, and sexual improprieties. God vouched for Joseph Smith in no uncertain terms. The fact that the LDS Church has become a critic of its founding prophet is beyond disappointing. It is dangerous. Evil speaking of the Lord's anointed, indeed.

DO let this bother you.


4. President Monson has still not testified of Joseph Smith or the Book of Mormon

At the April General Conference, President Monson retained his perfect record of never testifying of Joseph Smith or the Book of Mormon since October 2005. He's almost reached the ten-year mark without once bearing public testimony of the foundation of the church he leads.


5. President Packer has still not testified of President Monson


6. The Definition of Pretender

I've heard the word "pretender" used in reference to spiritual leaders before, but I never realized it doesn't just mean, as I had assumed, "one who pretends to be something they're not." Here's the actual definition:

A pretender is one who claims entitlement to an unavailable position of honour or rank. Most often it refers to a former monarch, or descendant thereof, whose throne is occupied or claimed by a rival, or has been abolished.

In other words, one who lays claim to the position, rank, or seat occupied by another, is a pretender.

I think the best way to summarize everything I've written so far is to say that there are those who lay claim to Joseph Smith's position, seat, and keys, while failing to demonstrate any of his gifts. They flail about, tinkering with policies, ignoring scripture, persecuting believers, and disparaging Joseph as they fundamentally alter the purpose and mission of the church Joseph founded and destroy the truths Joseph taught.

But you mustn't raise an opposing vote to any of this. Doing so may subject you to persecution, threats and vitriolic rejection by the "Christlike" followers of these pretenders. It will almost certainly get you cast out from among them.

Do let this bother you—very much.


7. Now, About Those Opposing Votes at General Conference

a) One shouldn't have a dissenting opinion

b) If one does have a dissenting opinion, it certainly should NOT be brought up at General Conference.

Posted by Adrian Larsen at 1:20 AM