Let Israel rejoice in him that made him: let the children of Zion be joyful in their King. Let them praise his name in the dance: let them sing praises unto him with the timbrel and harp.

This series on prophets has brought up a number of questions for various people about how to identify a true prophet. God works in patterns, and His prophets generally fit the patterns He established.

If you haven't yet read the prior 3 parts of this series, I recommend you read them first, in order, to lay the groundwork for this installment.

I've put together the following table to help us recognize and identify the patterns before us, as seen in scripture, church history, and modern practice.

In the following table, "Then" refers to prophets in scripture, up to and including Joseph Smith. "Now" refers to the modern LDS prophets, most particularly during the last 30 years or so.

The statements in this chart are all factual, and the pattern items noted are generally applicable. Of course, there are isolated exceptions to all the items here, but my purpose is to point out the widely applicable patterns, not the exceptions.

I have made no attempt to categorize any items as good or bad, right or wrong. I am merely stating things as they are. I didn't take the time to link to proof of each item noted, but they are all factual statements. If you doubt anything you read here, please investigate it further.

One more thing: If you are uncomfortable or angry with the facts presented, ask yourself why you feel that way. Since I have not attempted to make judgments about the facts, the judgments you make, and the resulting emotions are your own. I suggest that allowing emotion to cloud your logic and intellect puts you in great danger. Therefore, I think it's a good idea to suspend emotion and simply read as if you were seeking to understand a topic in school. If these facts bother you, it is because you find them negative.

More discussion will follow after the table. But for now, here are the obvious parts of the prophetic pattern, then and now: 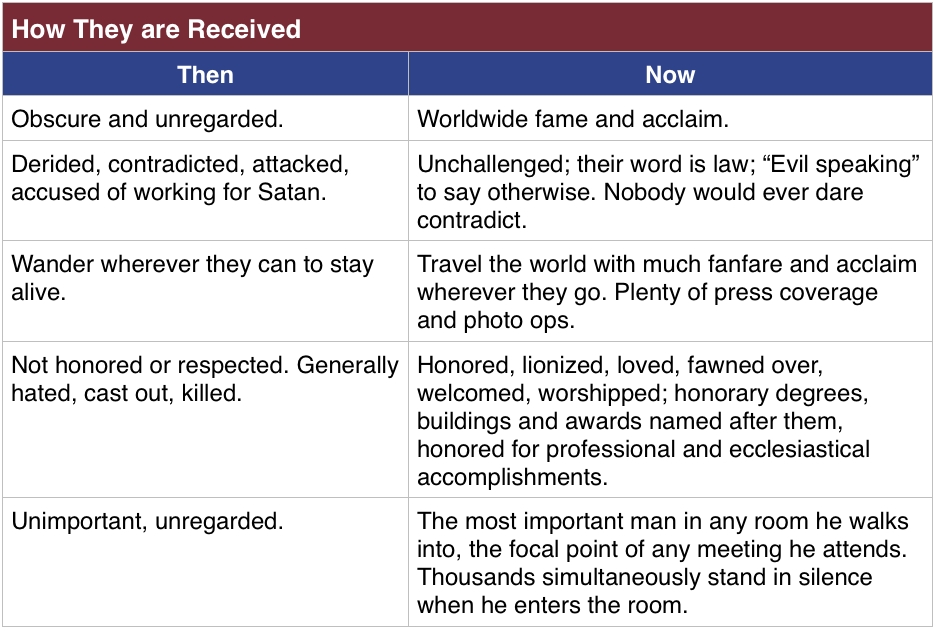 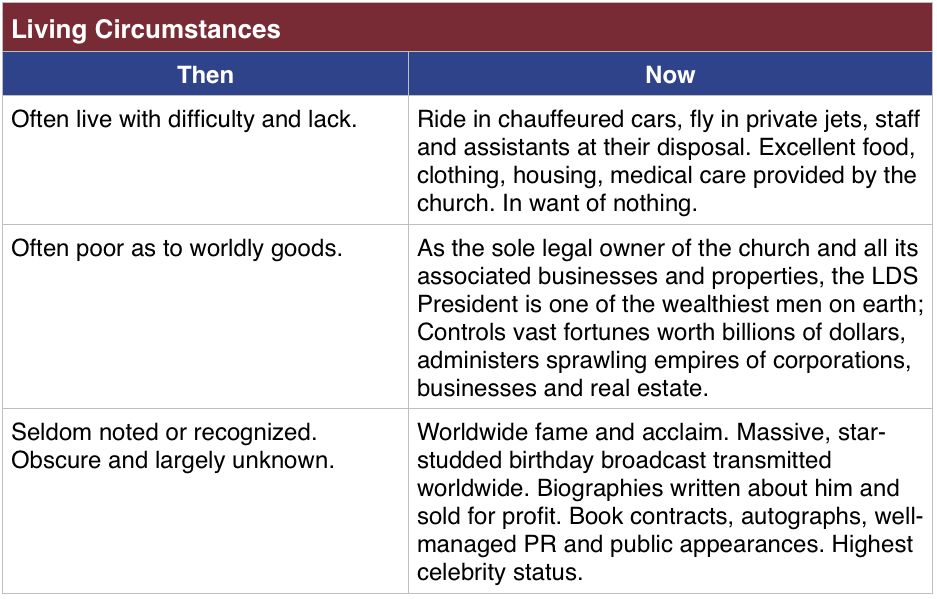 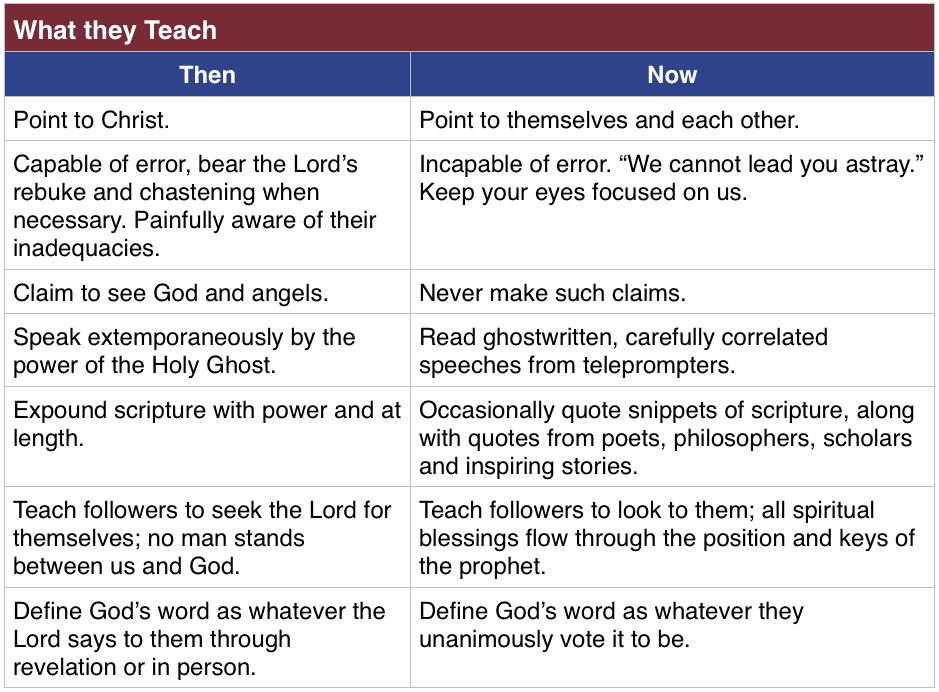 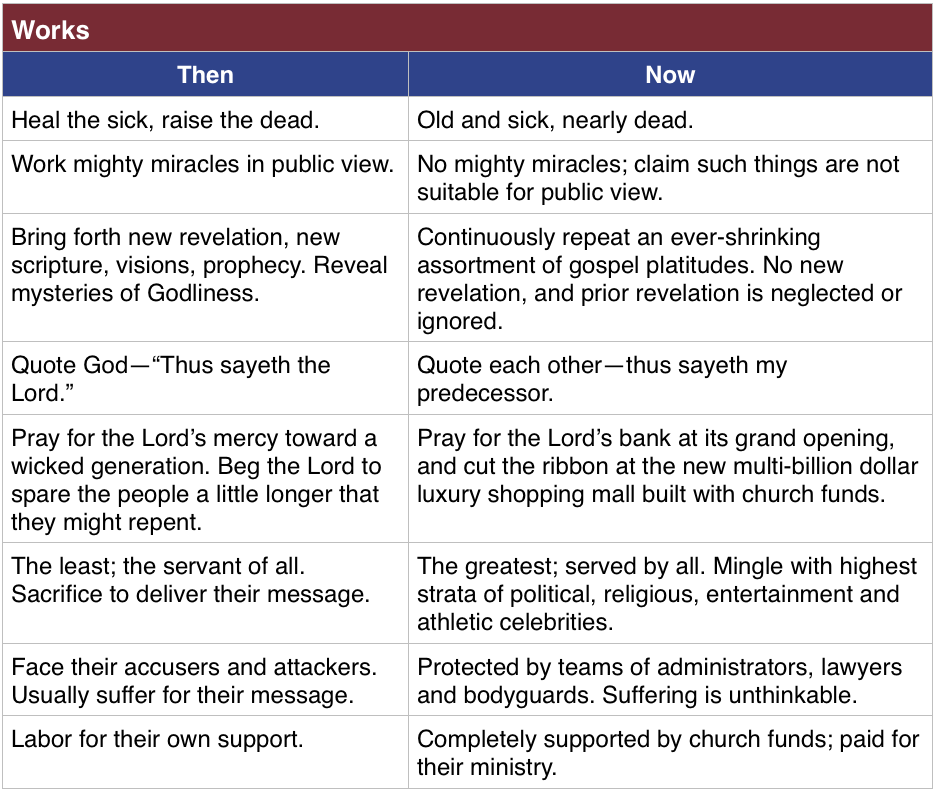 He commandeth that there shall be no priestcrafts; for, behold, priestcrafts are that men preach and set themselves up for a light unto the world, that they may get gain and praise of the world; but they seek not the welfare of Zion. (2 Nephi 26:29).

Look at the right columns again, and look at the Book of Mormon definition of priestcrafts. Then think carefully.

(Incidentally, priestcraft is a largely misunderstood, but nonetheless very negative term among Latter-day Saints. One who practices priestcraft would not want to be accused of such. That's why I find it curious that if you visit www.scriptures.lds.org and search on the term "priestcraft," the above scripture will not come up. And yet there it is in the Book of Mormon.)

We'll talk more about the prophetic pattern in my next post. But until then, here are some important things to consider:

You are no longer ignorant of the Lord's prophetic pattern. It has now been pointed out to you in specific detail. You have the facts before you, and you must make a judgment. You can choose to follow or believe whomever you want, but if you accept a man described in the right columns as the Lord's mouthpiece and representative, you cannot later claim you did so in ignorance.

Similarly, if you intend to lay claim on your salvation or excuse your errors by pointing to such a man as your leader, you will have no defense in the face of the justice of an offended God. Claiming you "followed the prophet" will provide you NO protection at the day of judgment. The Lord never commanded you to follow any mortal man. You, and you alone, will be responsible for your errors.

If you conclude all may not be well in Zion, and the man we call a prophet doesn't seem to live, act, work or teach like a prophet, take heart. All is not lost. First and foremost, you can go to the Lord yourself. You do not need a man to stand as intermediary between you and God. Whoever said you do was deceiving you.

O then, my beloved brethren, come unto the Lord, the Holy One. Remember that his paths are righteous. Behold, the way for man is narrow, but it lieth in a straight course before him, and the keeper of the gate is the Holy One of Israel; and he employeth no servant there; (2 Nephi 9:41)

As I said, all is not lost. Through this all there is actually good news to consider as well. But first, it's necessary to remove the scales from our eyes so we can see what the Lord has done in the past and is doing in our day. We'll discuss the good, hopeful, and inspiring modern works of God in a future post.

I'll close with a personal story.

My local LDS temple was extensively renovated and rededicated in 2012. As is standard church-wide practice, the youth in my stake were recruited to perform in a "cultural celebration" the night before the dedication. This occasion was touted as an opportunity for the youth to "dance for the prophet." I thought that sounded troubling, but chalked it up to some over-exuberance on the part of the one promoting the event.

Three of my children participated. As they prepared, I attended one of their rehearsals at my stake center. There, in the gymnasium, there must have been 300 kids crammed wall to wall, all facing the same direction and practicing their dance moves while trying not to step on one another. The dance instructor was at the front calling them through their moves, and above the dance instructor, taped to the wall at least 12 feet high, was a photo of President Monson. The picture was there to remind the children they would be "dancing for the prophet" when they performed. The phrase was used as motivation for the kids to give it their best. After all, they wouldn't want to let the prophet down.

This is a true story. I won't share the thoughts and pictures it brought to mind. I'll just summarize by saying it gave me a lot to think about.

And Jesus answered and said unto him, Get thee behind me, Satan: for it is written, Thou shalt worship the Lord thy God, and him only shalt thou serve.
—Luke 4:8


If you are a youth who wants to strengthen your testimony, develop your love for the temple, increase in your self-esteem, develop your talents, make new friends, and have a lot of fun, then the Youth Cultural Celebration is for you! Your participation in the YCC will be a treasured memory and a spiritual highlight in your life. This is your opportunity to perform for our beloved prophets and apostles and to feel of their Spirit and their great love for the youth of the Church. Come join us as we celebrate how we can prepare now to receive the blessings of the temple by being “Strong, Steadfast, and Immovable.”


PS: I probably could have saved you a lot of time by simply sending you to this link. It summarizes in 30 seconds what I've taken several minutes to explain.

Click here to go to part 5 of this series:
Crying in the Wilderness
Posted by Adrian Larsen at 2:05 AM