Hastening Past the Hastening

And let the work of the gathering be not in haste, nor by flight; but let it be done as it shall be counseled by the elders of the church at the conferences, according to the knowledge which they receive from time to time.

Did you notice anything different at October’s General Conference?

After 18 months of hearing about “Hastening the Work,” I expected to keep hearing about it for some time. What happened? Not a single conference speaker mentioned it even once! What gives?

As I covered in a previous blog post, the Hastening theme was off to a good start, and growing in popularity. It was attributed to President Monson, though he never said it. The Hastening enjoyed increasing mentions at each consecutive General Conference, and got its own Worldwide Leadership Training Broadcast last year.

But now? Nothing. It crashed even faster than it rose. 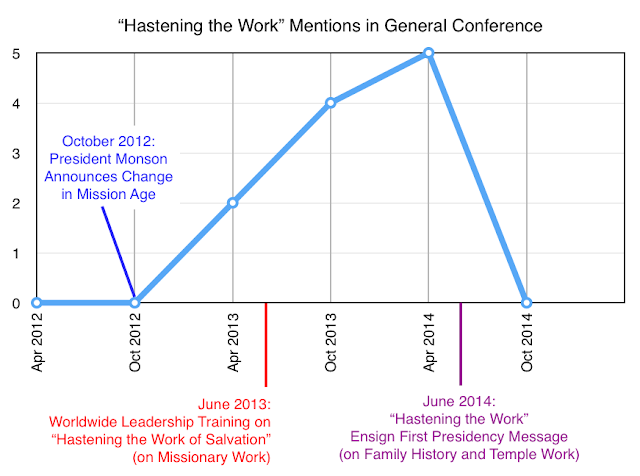 Whatever's up with the Hastening, it's clear nobody at General Conference was interested in talking about it. Of course, I may be reading too much into this, and the Hastening may return in April with renewed vigor (depending, I suspect, on the statistical report.) Anyway, I just thought it was curious.

And Now I would Commend You to Seek this Jesus...

Speaking of curious, you may have also noticed something else: The emphasis on hastening the work was replaced, at least at this conference, by an emphasis on the prophet, and a big one at that.

What do I mean?

Well, look at the titles of the first three talks given at the Sunday morning session:
It's easy to see the theme develop. While the "Hastening" wasn't mentioned once in the entire conference, the word "prophet" was mentioned 79 times in the first three talks alone of the Sunday morning session; the word "president" was mentioned 55 times, and "church" was said 53 times.


And moreover, I say unto you, that there shall be no other name given nor any other way nor means whereby salvation can come unto the children of men, only in and through the name of Christ, the Lord Omnipotent. (Mosiah 3:17)

That name—Jesus Christ—the one by which salvation comes and in no other way—it was mentioned 12 times, and most of those in passing.

Here's how it looks visually, when the words of the first three talks are placed in a word cloud with size equaling emphasis on words (thanks to Bare Record of Truth.)


And now, I would commend you to seek this Jesus of whom the prophets and apostles have written...(Ether 12:41)

See how long it takes you to find "Jesus." Ready, seek: 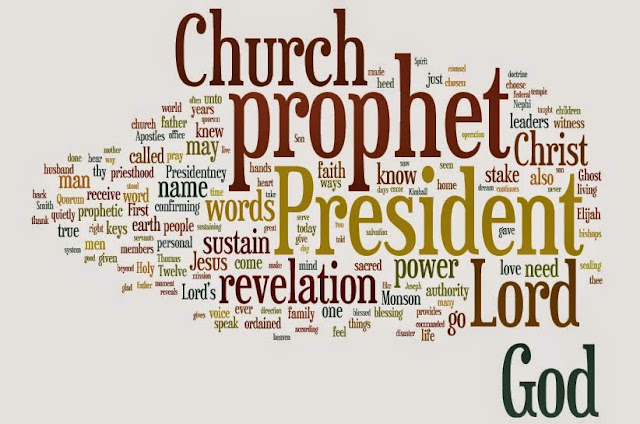 But the "prophet" emphasis wasn't just in the frequency of mention. It was also in the words spoken about the prophet at conference. Here are a few examples:

In that regard, I pay a personal tribute to President Thomas Spencer Monson. I have been blessed by an association with this man for 47 years now, and the image of him I will cherish until I die is of him flying home from then–economically devastated East Germany in his house slippers because he had given away not only his second suit and his extra shirts but the very shoes from off his feet. “How beautiful upon the mountains [and shuffling through an airline terminal] are the feet of him that bringeth good tidings, that publisheth peace.” More than any man I know, President Monson has “done all he could” for the widow and the fatherless, the poor and the oppressed.

Keep the eyes of the mission on the leaders of the Church. … We will not and … cannot lead [you] astray.

And as you teach your missionaries to focus their eyes on us, teach them to never follow those who think they know more about how to administer the affairs of the Church than … Heavenly Father and the Lord Jesus Christ do through the priesthood leaders who have the keys to preside.

We do not need to see an angel to obtain understanding. We have the scriptures, the temple, living prophets, our patriarchal blessings, inspired leaders, and, above all, the right to receive personal revelation to guide our decisions.

Our sustaining of prophets is a personal commitment that we will do our utmost to uphold their prophetic priorities. Our sustaining is an oath-like indication that we recognize their calling as a prophet to be legitimate and binding upon us.

From that I draw counsel for us all. Don’t take lightly the feeling you get of love for the prophet of God. Wherever I go in the Church, whoever the prophet is at the time, members will ask, “When you get back to Church headquarters, will you please tell the prophet how much we love him?”

That is far more than hero worship or the feelings we sometimes have of admiring heroic figures. It is a gift from God. With it you will receive more easily the gift of confirming revelation when he speaks in his office as the Lord’s prophet. The love you feel is the love the Lord has for whoever is His spokesman.

I must say I agree with President Eyring. This is indeed far more than hero worship.

It's not at all uncommon for general conference speakers to testify of the Church President's prophetic calling—sometimes at length. It happens multiple times in every conference session, just like it happens in every ward fast and testimony meeting. In fact, the most remarkable situation would be the opposite: a regular conference speaker who never testifies of the prophet.

So I find it curious that President Boyd K. Packer (current president of the Quorum of the Twelve, and next in line to be Church President) despite speaking in every General Conference since President Monson was sustained in 2008, has never yet born testimony that Thomas S. Monson is a prophet.

Correct me if I'm wrong, but as far as I've been able to find, in his 14 General Conference addresses, President Packer has never once directly called President Monson a prophet, even when speaking at length about him. And yet it's such a common refrain for other speakers.

Again, I'm not reading anything into this. I just find it odd.

What do you find odd?

Posted by Adrian Larsen at 1:35 PM