Are You Calling Joseph Smith a Liar?


What a thing it is for a man to be accused of committing adultery, and having seven wives, when I can only find one. I am the same man, and as innocent as I was fourteen years ago; and I can prove them all perjurers.

Joseph Smith stated publicly and repeatedly that he only had one wife. According to his public statements, he sought to root out and eliminate polygamy. The public record shows that he did so at every opportunity. 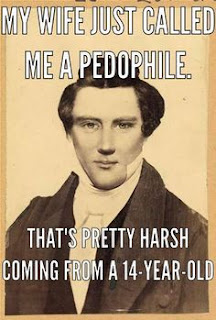 The LDS church and others claim that Joseph was privately married to a large number of women and had sexual relations with them, including a 14 year old.

Therefore, if you believe the LDS position that Joseph was a polygamist, you necessarily also believe he was a base liar, deceiver, hypocrite and practitioner of the worst sort of adulterous wickedness, because of his public statements.

Further, if you also claim Joseph was a prophet of God, you must therefore accept the proposition that it’s acceptable for "prophets of God" to engage in deception, lies, hypocrisy, and private wickedness.

Further, if you then accept modern Presidents of the LDS church, up to and including Thomas Monson, as prophets of God, by your very definition of "prophet," you not only give them license, but actually expect them to lie to you, deceive you, and practice private wickedness.

Them’s the facts, folks. You can’t have it both ways. If Joseph was a polygamist, he was a liar and a hypocrite. If you call him a prophet, you have redefined the word "prophet" to include the worst sort of deceiver. When you apply that word to modern leaders, you are, in fact, proclaiming your expectation to be deceived by them. Think about that when you raise your hand to sustain them.

But there is another way to view things.

What if Joseph Smith was telling the truth? What if the historical records after his death were influenced, even altered, to promote the views of Joseph’s successors? What if, whatever it was Joseph was doing, it didn’t involve sexual relations with multiple women?

There’s a VERY strong case to be made for this view. The essay linked below explores the historical record, and makes the case that Joseph told the truth, did not practice sexual polygamy, and was unfairly framed by his successors after his death.

My personal belief is that Joseph was telling the truth. I do not accept the proposition that he lied and deceived about polygamy—but told the truth about the Book of Mormon, angelic visitations, the first vision, and other issues which I KNOW to be true.

No, this is vital.

If you believe Joseph is a liar, then on what foundation do you place your testimony of revealed scripture, the restoration of the gospel and modern prophets?

It's time to clear Joseph's name. It's time to recognize the truth of the historical record. And if the LDS Church continues to call Joseph Smith a liar—you, and I, and all of us have to make a choice. I've made mine, and I'll stand with Joseph Smith.

Will you join the chorus of Joseph's accusers? Or will you doubt the LDS version of "history?"

I know this is uncomfortable. I know it's not easy. Believe me, I've been there. But the test is always the same. Do you value the truth, or do you cherish the security of being a follower, and pretending you don't have to search out truth for yourself?

Your eternal life hangs in the balance. Please take the search for truth seriously. 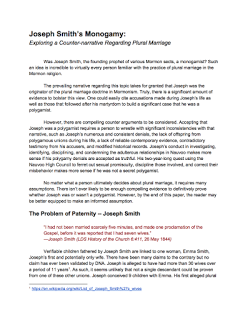 Note: I am not the author of this paper, but I do agree with its premise.
The author wishes to remain anonymous.

Cursed are all those that shall lift up the heel against mine anointed, saith the Lord, and cry they have sinned when they have not sinned before me, saith the Lord, but have done that which was meet in mine eyes, and which I commanded them.
—D&C 121:16
Posted by Adrian Larsen at 12:37 AM