This Tree Profiteth Me Nothing

Here's an excellent essay from Robert Sonntag, originally posted elsewhere. I thought it was too good not to share here: 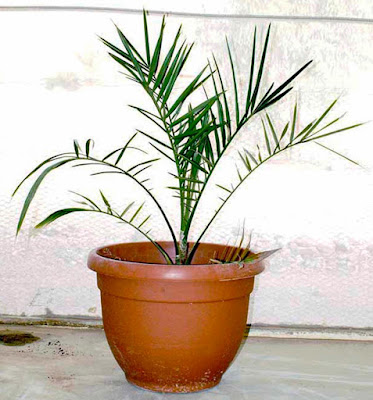 The 2,000-year-old seed that grew this date palm was found at Masada. This kind of tree was a staple of the diets and economies up and down the Jordan river valley for thousands of years. It went extinct shortly after the Romans' brutal conquest of Judea and scattering of the Jews.

The DNA inside of the cells of the seed was written thousands of years ago by a healthy tree. It stayed protected in the ground while the world changed and the species went extinct. It waited while empire after empire rose and fell. It waited through wars and famine. Some curious people dug it up and decided to experiment with it by planting it. It sprouted a tree that produces the pollen needed to grow fruit.

The DNA isn't the fruit, or even the tree. It is just a code telling the plant how to assemble raw material to make a tree, just information recorded in molecular form. The DNA can only construct a fruitful tree if it is carefully preserved and accurately interpreted. Even small aberrations can be disastrous.

So many things could have gone wrong in this process.

The seed could have been exposed to the elements - to frost, heat wind, or pests. Either the DNA or the enzymes and ribosomes that decode the DNA could have been damaged in a thousand different ways.

When people write, they imprint their thoughts and narratives in symbols on paper, wood, metal, stone, or animal hides. The symbols aren't the thoughts, just the instructions for how to think them. If you can read the symbols, you can get an echo of the thoughts of the writer, and experience their narrative by proxy. Even if the record stays hidden in a cave for thousands of years, the thoughts and narratives can come to life as long as soon as they are properly interpreted. You can feel the sorrow of Achilles for Patroclus, laugh at Diogenes telling Alexander to take two steps right, and your jaw can drop in horror at the descriptions of the Mongol horde.

The scriptures are the DNA of God's religion. They contain the thoughts and narratives of people who knew God and had access to the light and truth of God's personal instruction. "Whenever Salvation has been administered it has been by Testimony" (Joseph Smith, 1839). The writers recorded their testimony, the things they saw and heard, and scattered that testimony like seeds. Some went into the ground, and some were passed around exposed to the elements.

When Abraham, raised in a degenerate religion, studied the carefully preserved records of the fathers (Abr. 1:31), it led him here:


And, finding there was greater happiness and peace and rest for me, I sought for the blessings of the fathers, and the right whereunto I should be ordained to administer the same; having been myself a follower of righteousness, desiring also to be one who possessed great knowledge, and to be a greater follower of righteousness, and to possess a greater knowledge, and to be a father of many nations, a prince of peace, and desiring to receive instructions, and to keep the commandments of God, I became a rightful heir, a High Priest, holding the right belonging to the fathers. (Abraham 1:2)

Lecture on Faith 2 comments on this process:


Let us here observe, that after any portion of the human family are made acquainted with the important fact that there is a God who has created and does uphold all things, the extent of their knowledge, respecting his character and glory, will depend upon their diligence and faithfulness in seeking after him, until like Enoch, the brother of Jared, and Moses, they shall obtain faith in God, and power with him to behold him face to face.

We have now clearly set forth how it is, and how it was, that God became an object of faith for rational beings; and also, upon what foundation the testimony was based, which excited the enquiry and diligent search of the ancient saints, to seek after and obtain a knowledge of the glory of God: and we have seen that it was human testimony, and human testimony only, that excited this enquiry, in the first instance in their minds—it was the credence they gave to the testimony of their fathers—this testimony having aroused their minds to enquire after the knowledge of God, the enquiry frequently terminated, indeed, always terminated, when rightly pursued, in the most glorious discoveries, and eternal certainty. (Lecture 2:55-56)

This is the situation we are in now, which is one reason why Abraham is such an important figure. We were not raised in Zion. We were not brought up being properly instructed in how to seek God by people who knew him. The good instruction we did receive was often mixed with false traditions, the corrupted DNA code mixed in with the pure, that cause us to stumble (2 Nephi 28:14). In addition, we were not given the proper enzymes and ribosomes to decode the scriptures and construct Zion; we read them through a heavy filter, forcing them to match our ideas rather than the other way around. Our ribosomes misinterpret words like "redeemed", "rest of the Lord", "ordinances", "priesthood", "gentiles", "power of godliness", and "zion". The improperly decoded DNA is reproduced, labeled "continuing revelation," and forcefully injected into new cells.

Joseph Smith constantly fought against the ribosomes and enzymes of the Latter-day Saints. They insisted on continuing to use what they brought with them, while he begged them to accept what he was offering. The Lord himself got involved quite early, condemning the members for neglecting to use the correct DNA as they grew the Church.


And your minds in times past have been darkened because of unbelief, and because you have treated lightly the things you have received—Which vanity and unbelief have brought the whole church under condemnation.

And this condemnation resteth upon the children of Zion, even all.

And they shall remain under this condemnation until they repent and remember the new covenant, even the Book of Mormon and the former commandments which I have given them, not only to say, but to do according to that which I have written—

Using the correct DNA, the Book of Mormon and the other scriptures God went through so much trouble to bring forth, will yield fruit:


That they may bring forth fruit meet for their Father’s kingdom; otherwise there remaineth a scourge and judgment to be poured out upon the children of Zion. (D&C 84:54-58)

The condemnation remains in force because the fruit remains absent.

The tree that has sprouted from the impure DNA and malfunctioning ribosomes is a quite a sight: a flourishing growth of branches, leaves, and burls. It is excellent at reproducing itself by spreading roots and suckers. It has a massive bureaucracy dedicated to spreading branches and leaves, carefully pruning and propping. The fruit (the whole reason for the tree in the first place) has proved elusive since Joseph's death.

As a result, we've begun using our magic markers to label leaves and branches "fruit," and claiming that the tree is fruitful above all other trees (this happens routinely in General conference, and Elder Oaks did a fine job of it in Boise in June). Buildings are not fruit. Members being decent people are not fruit. When we finally produce fruit meet for the Father's kingdom, we will find the kingdom open to our view and we will be promised an inheritance there. Until then, we should put away our magic markers.

In spite of this silliness, we, like Abraham, have access to the pure DNA, the pure testimony of those who knew God. It's even easier for us than for Abraham, with scripture so widely published and accessible. Joseph Smith's scriptures and teachings—carefully recorded by his contemporaries—also provide us with the ribosomes and enzymes needed to understand them, since much of that material is simply commenting on and interpreting scripture.

How will Zion come? It will happen when some people finally "embrace the truth [not the traditions masquerading as truth], and look upward, then shall Zion look downward, and all the heavens shall shake with gladness, and the earth shall tremble with joy;"(JST Gen 9:22). This is remarkably similar to the promise given to those who receive and accept Joseph Smith's teachings:


...the gates of hell shall not prevail against you; yea, and the Lord God will disperse the powers of darkness from before you, and cause the heavens to shake for your good, and his name’s glory. (D&C 21:6)

The truth is waiting to be embraced. First we need to study it enough to understand it, and enough to disentangle the good DNA from the bad that has been mixed in.
Posted by Adrian Larsen at 9:53 AM