Prophets, Part 3:
We Thank Thee, O God, for a Princess

In the first two posts in this series, we discussed the fruits of a prophet, and the standard set by the Lord for discerning a true prophet. "By their fruits ye shall know them." (Matthew 7:20)

We also covered the fact that, without the fruits of prophecy, visions, and revelation, it's impossible to tell if someone is a prophet, seer or revelator. The fruits come by gifts of the Spirit, not by virtue of any office in the church. Sadly, these fruits have been absent from the LDS church for quite a long time—that is, we cannot point to any new revelation, prophecy, or vision to the church in the last hundred or so years.

When I have pointed out this fact to my brothers and sisters in the church, and even church leaders, the most common reply is that we receive revelation at every General Conference. Indeed, some regard every talk by the members of the First Presidency or an apostle as revelation—because these men are sustained as prophets, seers and revelators. 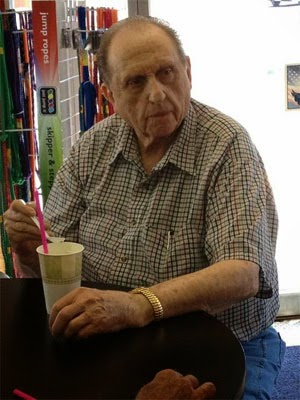 Allow me to illustrate what I mean. For purposes of this discussion, let's accept the proposition that our sustained prophets give revelation at every General Conference. In fact, to make things simple, we'll confine our search to just the President of the Church. Nobody will question that he is certainly accepted and sustained as a prophet, and therefore the common belief is that his words are revelation to the church.

Therefore, since he is issuing revelation as a prophet, his talks should be qualitatively different than what is offered by, say, a member of the Second Quorum of Seventy, the Presiding Bishop, or the Relief Society General President. If you take the names off the talks and simply read them, you should be able to pick out the revelations of prophets, which are different than the talks of non-prophets, right?

Try these. Which of these was spoken by a prophet at General Conference?

OK, what do you think? Which words were spoken by a prophet and which were not? Clearly, all are inspired messages, and teach truth. But which rise to the level of revelation or prophecy? Here's the answer key:

Number one was spoken by President Monson in the October, 2009 General Conference. These are the words many will elevate above the others and call them revelation. Read them again. Any new revelations there?

Number two is tricky. These are the words of Christian author C.S. Lewis, but some of them were borrowed by Ezra Taft Benson for his April, 1989 General Conference address. When the words originate with a non-prophet, but then are spoken by a prophet, do they become elevated to revelatory status?

Now, I'll admit that such a test as I just offered is necessarily limited. I've only taken excerpts of talks, devoid of context. But I did that intentionally to focus on the message, rather than the setting in which it was offered.

Nevertheless—and I won't take the space here to do so—I submit that you could do the same with entire conference talks. Take off the speakers' names, then try to pick out the talks of prophets vs. non-prophets. Could you conclusively say what is revelation and what is merely inspiration?

This was brought to my attention forcefully, when someone emailed me a link to a fictional general authority website, containing absurd parodies of General Conference talks. The site was sent to me in the context of being an important addition to the topic at hand. It wasn't until a couple of days later, as I recall, that the sender realized the deception and told me the site might be fake.

Hey, if you use the right vocabulary, speak the correlated phrases, and parrot what other general authorities have said, guess what? You'll sound just like them.

And that's just the point. Men and women, even children, speak inspired words and teach beautiful truths. People of all faiths do so. LDS leaders certainly do. Calling such words prophecy or revelation because they come out of one person's mouth, but merely a good talk when they come out of another person's mouth makes the owner of the mouth the most important deciding factor in discerning truth. It elevates the speaker above the message, and relieves us of our obligation to seek confirmation from God. It makes a man into an idol and God's word into a secondary consideration. This is against Christ's injunction to know the man by the fruits, and not the fruits by the man. 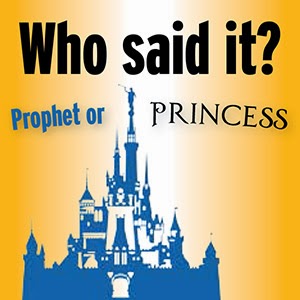 You may not want to read what follows. It's a harsh reality, but it wasn't my idea. No, it's an idea promoted by the LDS Church. More specifically, I got what follows from an article in LDS-church-owned magazine, LDS Living, in which a quiz was offered comparing the words of LDS prophets to those of Disney characters. Check it out at this link.

Yes, that's right. Prophet or princess? Hard to tell? That's what makes the quiz so fun! The words of the prophets are entertaining! It's not like your soul is at stake or anything. Have some fun!

Though I write a lot of stuff, there are times when I'm so caught off guard that I'm at a loss for words.

This is not one of those times.

Two words, in fact, come readily to mind. But this is a family-friendly blog, so I'll edit them and present them as follows:

Are you SERIOUS? Let's compare what we claim are the direct words of Jesus Christ—to vapid platitudes of Disney Princesses? For fun? And THIS is what passes for revelation? THIS is how we claim to receive the very oracles of God? THIS is where so many of us will hang our salvation, secure in the knowledge that we can never be led astray?

Allow me to quote another animated, fictional character—namely, Homer Simpson: "Feeling stupid? I know I am!"

But it's OK, because in the words of the Pooh prophet Winnie: "You're braver than you believe, and stronger than you seem, and smarter than you think."

And it's a good thing, too. Because you're going to need those smarts to beat the next quiz (Again promoted by the LDS church in LDS Living magazine). That's right, it's time to play Dieter or Dumbledore! 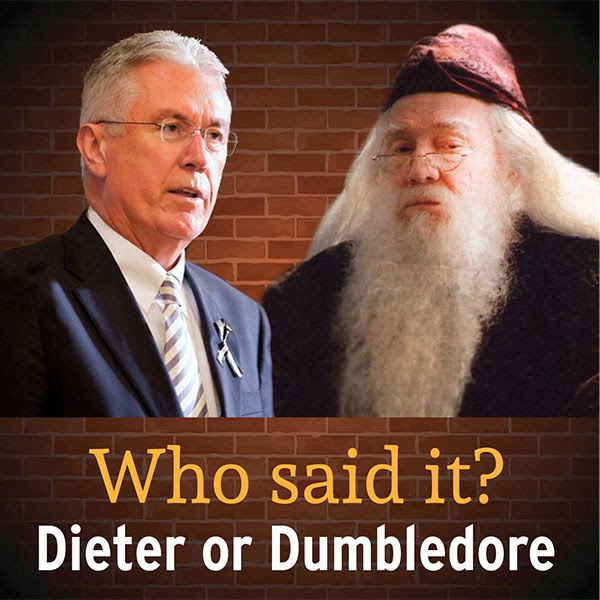 In this fast-paced religious extravaganza, you get to guess which hackneyed clichés were uttered by fictional wizard Albus Dumbledore and which were spoken by prophet, seer and revelator, Dieter Uchtdorf. After all, as the introduction states, "They both have silvery hair, speak with foreign accents and are known for their wisdom."

I hope you'll forgive the sarcastic tone of the above. Sometimes this is the best way to highlight utter absurdity. When the sayings of those called prophets are viewed as sources of entertainment, when the words of eternal life are confused with the slogans of fictional wizards, when we, like fools, trifle with sacred things, unable to discern God's word from man's, we are indeed "wretched, and miserable, and poor, and blind, and naked." (Revelation 3:17)

Would we ever play such games with the words of Christ? Isn't the fact that we play such games proof enough that, though we claim the prophets speak for Christ, we don't really believe they do? Do we not show, by our own works, that prophecy has ceased? When those we call prophets only offer what is commonly available and ceaselessly repeated every six months, how will we ever know God's will?

What are we to do in such circumstances?

Well, it ends where the restoration began, with James 1:5.


If any of you lack wisdom, let him ask of God, that giveth to all men liberally, and upbraideth not; and it shall be given him.

It never was about finding a man to follow. It's always been about finding God for ourselves. Of course other mortals can point the way to Christ, but ultimately the journey to find him is undertaken alone, "relying wholly upon the merits of him who is mighty to save." (2 Nephi 31:19)

But seeking Him will take work. And faith. And it may require letting go of cherished, but false, traditions. And that might be uncomfortable.

So it might be more entertaining to just go read this article about what prophets have said on the topic of Santa Claus. Oh—and I hear the Muppets are delivering the glad tidings of great joy this year too!

And the people bowed and prayed
To the neon god they made
And the sign flashed out its warning
In the words that it was forming
And the sign said
"The words of the prophets are written on the subway walls
And tenement halls
And whispered in the sound of silence"
(Paul Simon, The Sound of Silence)

Oh that we would turn to God ourselves, search the scriptures, cry in mighty prayer, and seek to know Him. Then, having obtained a hope in Christ, perhaps we may again hear words over the pulpit like those of Benjamin:

My brethren, all ye that have assembled yourselves together, you that can hear my words which I shall speak unto you this day; for I have not commanded you to come up hither to trifle with the words which I shall speak, but that you should hearken unto me, and open your ears that ye may hear, and your hearts that ye may understand, and your minds that the mysteries of God may be unfolded to your view.

Click here to go to part 4 of this series:
Presidents, Popes and Politicians

Update December 29, 2017: Those tricksters at LDS Living are at it again! Here's a fun quiz they put together, where you can try to tell the difference between the words of J.R.R. Tolkien, C.S. Lewis, and living prophets and apostles. Remember, "Their wisdom is timeless and their words touch our hearts."

The tricky bit: Many of the quotes from Lewis and Tolkien were used in General Conference...so...does that make them prophetic?
Posted by Adrian Larsen at 11:11 AM