GREAT is the Lord and greatly to be praised in the city of our God, the mountain of his holiness—beautiful for situation, the joy of the whole earth, Mount Zion, the sides of the north, the city of the great King. God is known in her palaces for a refuge.


Tonight is the Winter Solstice, featuring the longest night and shortest day of the year in the northern hemisphere. Starting tomorrow, light increases.

The return of light always reminds me of the restoration of the gospel—for several reasons, not the least of which is Joseph Smith’s birthday, coming in two days on the 23rd. This event often also includes a display of the Ursids Meteor Shower, and this year will be no exception.

The Ursids are so named because they appear close to the star Beta Ursae Minoris in Ursa Minor, also known as Kochab. In antiquity, this star was the northern pole star, near the center point about which the heavens rotate. Of course, due to the precession of the equinoxes, this is no longer the case, and the current pole star is Polaris.

Kochab (Kokob) is also the word the Lord used for “star” while explaining the heavens to Abraham, face to face. (See Abraham 5:3, NC) I have no proof, but I like to think the star to which the Lord pointed (his hand was stretched out) was the polar star, Kochab, at the center of the heavens. The Ursids, therefore, can be seen as flashes or streaks of light, coming from the center point, the “Sides of the North” (Isaiah 6:6, Psalms 48:1 OC), the “bosom of eternity,” or “midst of all things” where God dwells. (T&C 86:1) Light returns to the world. 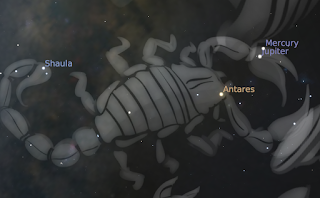 This year’s Solstice also features the conjunction of Mercury and Jupiter, less than one degree apart in the sky. They approach each other as Mercury, mythical god of commerce and communication falls, and Jupiter, mythical sovereign god of sky and thunder, rises. Take from that what you will. On an unrelated note, the stock market blood bath continues.

Their conjunction occurs in the constellation Scorpius. In Greek mythology, the great scorpion was sent to kill the mighty hunter, Orion, who boasted he would kill every animal on earth. Orion died from the scorpion’s sting and was placed in the heavens as a reminder of the need to curb excessive pride. 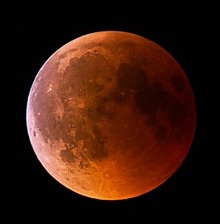 This year’s Solstice is unique in that it will occur during a full moon, which in this circumstance, was historically called a “cold moon” by Native Americans. As light withdraws from the world, and the love of men waxes cold, this solstice full moon serves as a stark reminder of our need for the light and warmth of God’s spirit. The moon, representing the Holy Mother, yet urges us forward, showing us light is yet available to those who will seek it, even on the longest, darkest night.

One month from today, instead of a cold moon, we will see a blood moon, during the total lunar eclipse on January 21, 2019. This will be a “supermoon” blood moon as the moon will be at its orbital perigee, its closest point to earth, and will therefore appear exceptionally large. Cold moon followed by blood moon. Light yet remains, but ominous signs continue.

In the coming dark days and years, each of us must be filled with the warmth and light of God’s spirit if we hope to overcome the increasing wickedness, instability, antagonism, violence and destruction that will come. Ultimately, we each, individually, control the amount of light we have, and therefore, the amount of protection we receive in coming dark days. The opportunity has never been greater, nor the light more plentiful since Joseph and Hyrum were killed. We can choose to obtain oil for our lamps now, while the opportunity yet remains, or we will find ourselves shut out of the wedding feast, mourning in the darkness. Don’t come unprepared to “that long night of darkness, wherein there can be no labor performed.” (Alma 16:37 NC)


During the daylight a man can see to walk and does not stumble and fall because the daylight informs him. But at night, without the light, a man stumbles because of the darkness surrounding him.