But the record thereof is of great worth, and whoso shall bring it to light, him will the Lord bless. For none can have power to bring it to light save it be given him of God. For God will that it shall be done with an eye single to his glory, or the welfare of the ancient and long dispersed covenant people of the Lord, and blessed be him that shall bring this thing to light, for it shall be brought out of darkness unto light according to the word of God. Yea, it shall be brought out of the earth, and it shall shine forth out of darkness and come unto the knowledge of the people, and it shall be done by the power of God. And if there be faults, they be the faults of a man.


The volunteer project to produce a more correct and true-to-original set of scriptures has born wonderful fruit. All three volumes are now available on Amazon and as PDF downloads.

Volume 1: The Old Covenants contains the Joseph Smith translation of the Old Testament, including the work formerly published as the Book of Moses, which has been properly placed where it belongs in the book of Genesis. It is the most exhaustively accurate version of Joseph Smith’s Old Testament work ever printed, and the only version to contain every correction that can be shown to have come from Joseph.

Volume 2: The New Covenants includes both the New Testament and The Book of Mormon, published together in one volume, as Joseph Smith intended. As with Volume 1, the Joseph Smith translation of the New Testament is the first ever printed to include all the changes Joseph made. Likewise, this is the most textually accurate version of The Book of Mormon ever printed, having been exhaustively reviewed and compared with the original manuscript, the printer’s manuscript, and all versions personally edited by Joseph Smith.

Volume 3: Teachings and Commandments contains works formerly included in the Doctrine and Covenants and Pearl of Great Price, as well as revelations to Joseph Smith not previously published, and recent revelations given through Denver Snuffer. One of the most remarkable new revelations published is The Testimony of St. John, which I have written about previously.

I’ve been carefully searching John’s testimony and leading group studies on it over most of the last year. After a year of exhaustive study, I believe this testimony is—thus far—unparalleled among scripture. Its light can only be described as brilliant. 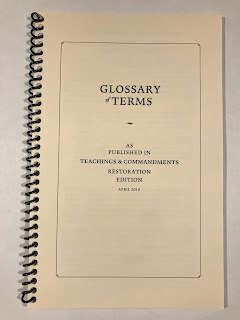 One of the hidden gems of the scripture project is the 71-page Glossary of Terms, featuring outstanding explanations of numerous gospel terms and concepts. Not only does it stand on its own as an incredible resource of higher understanding, but it also adds immense richness as a vital companion to scripture study.

Because the Glossary is in the back of a lengthy volume, I’ve found it very useful to have a separate, printed copy for ready reference during study. Here’s a link where you can download PDF copies in various sizes and printing configurations:

The dozens of volunteers who spent thousands of combined hours laboring on this project deserve our gratitude. I’m amazed and delighted that they have accomplished what much larger, better staffed, and wealthier organizations have never bothered to do, despite having  access to expert scholars, original texts, and vast financial resources. Apparently desire and willingness trump all those other resources on God’s balance sheet.

Never underestimate the miraculous potential of scrappy volunteers, inspired by God, and willing to work.

Hearken diligently unto me and remember the words which I have spoken, and come unto the Holy One of Israel, and feast upon that which perisheth not, neither can be corrupted, and let your soul delight in fatness. Behold, my beloved brethren, remember the words of your God.