And they shall turn away their ears from the truth, and shall be turned unto fables.


In this series of posts, we're examining so-called Mormon myths, also known as faith-promoting rumors. These are lies taught as truths, in hopes of promoting an agenda. 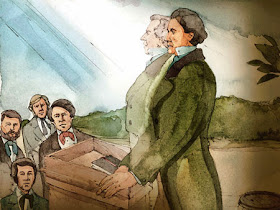 Some of them are dishonestly published in anti-Mormon publications; others are dishonestly published in official church manuals and materials. The point is that they aren't true, and therefore aren't faith-promoting at all. Remember, faith must be based on truth--the ultimate truth being God himself--and therefore belief in anything that is untrue cannot ever mature into saving faith.

Such belief will not, indeed cannot, save you. It will damn you. Therefore, uncritically believing any doctrine that is not taught in scripture and ratified by the Holy Ghost is dangerous indeed when your eternal life is at stake

Unfortunately, we do seem to love us a good fable more than we love truth.

Take, for example, the well-known story of the transfiguration of Brigham Young. Here it is from the 2003 LDS-church-produced manual, Church History in the Fulness of Times:


The Mantle Falls on Brigham Young

Thursday, 8 August 1844, stands as one of the most important days in the history of the Restoration. On that day a miracle occurred before the body of the Church—Brigham Young was transfigured before the people, and the succession crisis of the Church was resolved...

People of all ages were present, and they later recorded their experiences. Benjamin F. Johnson, twenty-six at that time, remembered, “As soon as he [Brigham Young] spoke I jumped upon my feet, for in every possible degree it was Joseph’s voice, and his person, in look, attitude, dress and appearance was Joseph himself, personified; and I knew in a moment the spirit and mantle of Joseph was upon him.” Zina Huntington, who was a young woman twenty-one years old at that time, said “President Young was speaking. It was the voice of Joseph Smith—not that of Brigham Young. His very person was changed. … I closed my eyes. I could have exclaimed, I know that is Joseph Smith’s voice! Yet I knew he had gone. But the same spirit was with the people.”

George Q. Cannon, then a boy of fifteen, declared that “it was the voice of Joseph himself; and not only was it the voice of Joseph which was heard; but it seemed in the eyes of the people as though it was the very person of Joseph which stood before them. … They both saw and heard with their natural eyes and ears, and then the words which were uttered came, accompanied by the convincing power of God, to their hearts, and they were filled with the Spirit and with great joy.” Wilford Woodruff testified, “If I had not seen him with my own eyes, there is no one that could have convinced me that it was not Joseph Smith speaking.”

You can read it in a much longer recounting in the (2010) Teachings of the Living Prophets Student Manual. It's far too lengthy to quote here.

But here it is, in a much more abbreviated form in the Teachings of Presidents of the Church: Brigham Young manual (1997):


Many witnesses noted that President Young looked and sounded like the Prophet Joseph as he spoke, a powerful manifestation of divine approval.

Here's the trouble with this faith-promoting story about Brother Brigham: It never happened.

Now, rather than go into all the specific detail required to substantiate such a statement, I'll just save time by referring you to the thoroughly researched paper, published in 1995, that provides all the details. This is important stuff, but if you're not up for reading all 23 pages, here's the summary:

Why would the LDS church do such a thing?

Well, for the same reason that the story was invented in the first place: It serves a specific purpose.

When the Brigham Young transformation story first began its life in the late 1850's, it filled unique needs. Here's the climate in which the story was born:
In the midst of these turmoils, a cultural myth proving Brigham was indeed the one chosen of God to lead the saints was most welcome because it vindicated him and vindicated the saints who followed him. The transfiguration story provided a connection with the divine that had been desperately lacking since the days of Joseph Smith. And the story provided reassurance that all was indeed well, despite the hardships of the 1850's.

In the end, the story started innocently enough with claims that the "mantle of Joseph" fell upon Brigham, and from there it just got legs. Soon, folks were claiming that Brigham became taller, thinner, spoke with Joseph's trademark whistle, had the gestures, mannerisms, voice, and even face of Joseph. The more time went by, the better the story got.

But if it were really all that impressive, doesn't it make sense that someone would have mentioned something--anything--about it when it happened? Why is the first mention 13 years later? Why did the twelve issue a statement the following week that there was no longer a prophet on the earth? And why was the vote specifically for the TWELVE to lead the church, and not Brigham Young individually? Such a convincing display should have produced a vote for Brigham himself to be the next leader. But it didn't.

Because it never happened.

Now, I'm not saying Brigham wasn't the man for the job. I'm convinced he was probably the only man in the church at the time who could have possibly kept the church together, relocated the saints to Utah, preserved the scriptures and teachings to the degree they were preserved, and left a legacy for us to comment upon 170 years later. Brigham did all this and more. He managed to preserve the church against nearly insurmountable opposition. It's no wonder people began making him into something more than a man who was voted in by a group. The saints wanted, no, needed him to be called of God, chosen in a miraculous way, and every bit the measure of Joseph Smith.

But he never was Joseph's equal--a fact which he frequently pointed out to the saints. Nevertheless, the myth stuck and a hero was born. Sadly, Brigham did nothing to dispel it.

Today, we repeat the myth in our histories and manuals. It's clearly dishonest to do so. What would be so wrong with appreciating Brigham's contributions, without the need to make him more than he was? I personally appreciate Brigham Young for all that he accomplished so that I could receive the legacy of what Joseph started. I'm certain that if it weren't for Brigham's work, I would never have heard of Joseph Smith or the Book of Mormon. I thank God for that legacy daily.

I don't need any divine doppleganger display to convince me of Brigham's accomplishments. Why lie about the man? Insisting on such a sign in the face of clear evidence it is false does a disservice to Brigham's memory. Yet the myth continues.

And so it is with the Latter-day Saints of today. We love a good faith-promoting rumor so we can comfort one another as we march toward Hell in our unbelief. Since we don't publish new revelation, we instead publish falsehoods in our manuals and histories to promote a narrative of relying on leaders instead of the Lord.

So long as we value tingles over truth, we'll never rise up to become what God intended. Our God is a God of truth. Until we learn that lesson, we will remain unredeemed.