The mouth of the just brings forth wisdom, but the froward tongue shall be cut out.

He that is void of wisdom despises his neighbor, but a man of understanding holds his peace.

Tomorrow is the last day of 2021, which has, by all accounts, been a challenging year. Fittingly, the day will dawn with an appropriate sign from heaven, visible in the Southeastern sky. Just before sunrise, the waning crescent moon will appear in conjunction with Mars and Antares. This conjunction will occur under the foot of Ophiuchus, between the claws of Scorpius. 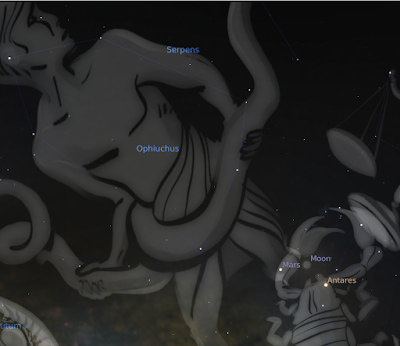 Let’s consider the players in this display:

The Moon: Associated with Heavenly Mother, the divine feminine, wisdom and counsel. The waning moon is nearly gone, with just 8% illuminated. She will continue to wane January 1, then will become a new moon on January 2, with all illumination gone.

Mars: The red planet, named for the God of war, destruction and destabilization. It represents power, control, military might, and authoritarianism.

Antares: This star’s name is Greek and it means “rival to Mars.” It is actually a binary star, consisting of the bright, red-orange Antares, and the dim, blue/green Antares B in perfect balance. These two are one for all intents and purposes, and can only be separately distinguished with a very powerful telescope. Antares is, on average, the 15th brightest star in the night sky.

Ophiuchus: This constellation is the “serpent bearer” and is depicted as a man holding a snake—which snake is actually a separate constellation named Serpens. In Greek mythology, the Ophiuchus represents healing and resurrection from death.

Scorpius: This constellation, represented as a scorpion, carries the sting of death, representing danger and destruction.

Now, with all the players identified, here’s the picture I see at the last day of 2021.

I view this all as a reminder that we stand at a point of decision. The current division in our society is at unrivaled in the history of our nation. Divisions over politics, race, gender, rights and medicine not only stir up anger and contention, but as a people, we’ve seemingly lost the ability to disagree in any civilized way. Rather than viewing those who hold ideas opposite our own as fellow humans with reasons to believe as they do, we increasingly view them as hostile rivals, deserving only destruction, and too stupid or insane to be functional humans. In nearly every issue, the middle ground has given way to deeply polar opposites, with neither side willing to concede any ground, and bent only on the destruction of the other.

Unfortunately, such sentiments are not merely figurative, and are not exaggerations. Actual politicians and thought leaders repeatedly call for the incarceration, forced “re-education” or even death of their opponents—who have committed no crime other than having a different opinion on an issue. Such rhetoric is increasingly tolerated, even welcomed, while reasonable free speech is increasingly censored and deplatformed.

We were warned about such a situation by the Lord:

For you to unite I must admonish and instruct you, for my will is to have you love one another. As people, you lack the ability to respectfully disagree among one another. You are as Paul and Peter, whose disagreements resulted in jarring and sharp contentions. Nevertheless, they both loved me and I loved them. You must do better. (T&C 158:3)

Likewise, we have been counseled how to avoid the folly that is rapidly overtaking our society:

Wisdom counsels mankind to align their words with their hearts, but mankind refuses to take counsel from Wisdom.

Nevertheless, there have been sharp disputes between you that should have been avoided. I speak these words to reprove you that you may learn, not to upbraid you so that you mourn. I want my people to have understanding. (T&C 157:4-5)

Satan is a title and means accuser, opponent, and adversary; hence, once he fell, Lucifer became, or in other words was called, Satan, because he accuses others and opposes the Father. I rebuked Peter and called him Satan because he was wrong in opposing the Father’s will for me, and Peter understood and repented.

In the work you have performed there are those who have been Satan, accusing one another, wounding hearts, and causing jarring, contention, and strife by their accusations. Rather than loving one another, even among you who desire a good thing, some have dealt unkindly as if they were the opponents, accusers, and adversaries. In this they were wrong.

You have sought to recover the scriptures because you hope to obtain the covenant for my protective hand to be over you, but you cannot be Satan and be mine. If you take upon you my covenant, you must abide it as a people to gain what I promise. You think Satan will be bound a thousand years, and it will be so, but do not understand your own duty to bind that spirit within you so that you give no heed to accuse others. It is not enough to say you love God; you must also love your fellow man. Nor is it enough to say you love your fellow man while you, as Satan, divide, contend, and dispute against any person who labors on an errand seeking to do my will. How you proceed must be as noble as the cause you seek. You have become your own adversaries, and you cannot be Satan and also be mine. Repent, therefore, like Peter and end your unkind and untrue accusations against one another, and make peace. How shall there ever come a thousand years of peace if the people who are mine do not love one another? How shall Satan be bound if there are no people of one heart and one mind? (T&C 157:8-10)

As the last day of the year dawns, while the light of Wisdom is yet visible and the choice is laid before us, let us choose harmony, peace, kindness, healing and life. Such could heal the world, but if the world chooses not to be healed, it will still be necessary for a covenant people to live together in peace and harmony, even as the world degrades to authoritarianism warfare, destruction and death.

Just as the conflict is beneath the foot of Ophiuchus, we may rest with the utmost assurance that our Lord will ultimately place all enemies beneath his feet (T&C 35:2). Let us choose to not be enemies. 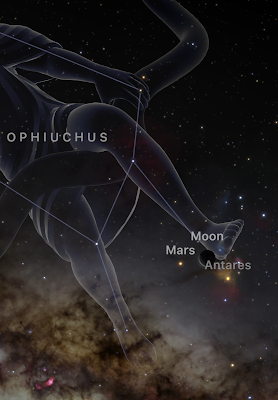 Antares is the 15th brightest star in the night sky, and Omicron is the 15th letter in the Greek alphabet. The Omicron variant of the virus that causes Covid-19 appears to be following the path that all viruses tend to follow as they work through the human population. It is much more contagious than any previous variant, but it is also much less deadly. Indeed, it may well be a tremendous blessing to all humanity by conveying widespread, robust immunity to those who contract it, which will be nearly everyone, while simultaneously causing very little severe illness or death. It may be God’s way of ending the Covid “pandemic” through naturally derived herd immunity.

But we also have a faction who sees their power, control and wealth slipping away if the pandemic lessens or ends, and they are therefore trying to create even greater fear than ever before, touting Omicron as the deadliest, most dangerous development yet, which can only be addressed by further loss of freedoms, further economic destruction, endless ineffective vaccinations, and greater surrender of power to those who claim to be in charge.

Again, we stand at a crossroads, and we must choose fear or faith. Omicron comes from the Phonecian/Semitic letter Ayin—the eye—and we are most certainly being watched by the heavens as we choose how we will respond. The eye is upon us as 2021 comes to an end.

The eyes of the Lord are in every place, beholding the evil and the good.

Every way of a man is right in his own eyes, but the Lord ponders the hearts.

As the Lord's work moves forward, some young people in the movement have felt the need to petition the Lord's guidance and help through a group fast. I'm delighted to support this effort. 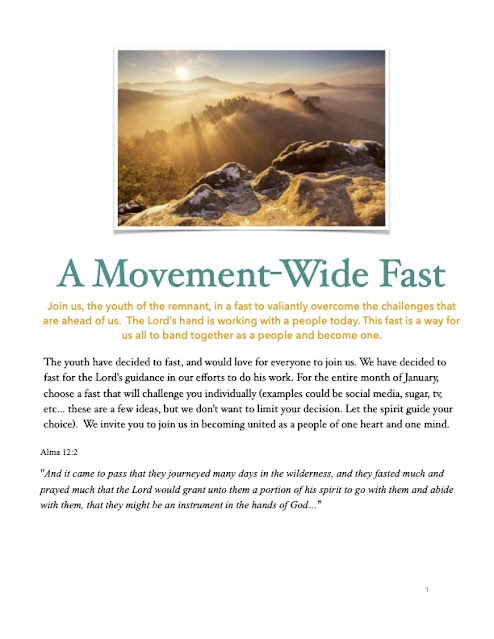